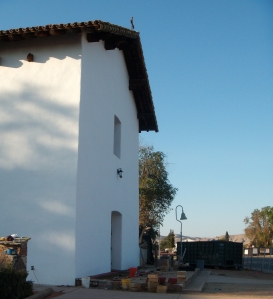 A couple of weeks ago, I visited the Mission San Miguel Arcangel, known as the mission on the highway (it is right off Highway 101), in between San Francisco and Los Angeles.

The church has now reopened after suffering serious damage in the 2003 San Simeon earthquake. It had been closed for nearly six years.

I talked to volunteers, adobe experts, conservators, and project manager John Fowler gave me a tour of the progress of a major seismic retrofit and restoration project. The official consecration was on September 29, the Feast Day of St. Michael and the public dedication took place Friday, October 2, 2009.

The interior murals were painted in 1821 by the local Salinans, a tribe named for the nearby Salinas River and they are still intact. The mission managed to raise $10 million so far, including its earthquake insurance claim (a very smart mission indeed to have earthquake insurance).

More funds are still needed to conserve the murals. They are a stunning work of early California history and worth a visit. Read more about my mission visit at Preservation Magazine‘s online edition with more photos of interior details, exterior and some of the people involved in saving the mission.

What does Mission San Miguel have to do with Pflueger, you might ask? Each of the 21 missions are important to architectural history in California, as the first settlements of the Spanish and for their rough interpretation of Spanish Colonial architecture.

Pflueger was inspired by the Mission Dolores, a quick walk from his home up the hill on Guerrero Street, for his first executed work.If you ever visit the small country church, Our Lady of the Wayside, in Portola Valley, you will see a resemblance to San Francisco’s founding mission. The side buttresses (not visible in this photo) are also reminiscent of Mission San Gabriel.

There is a great story behind the building of the church, which was completed in 1913, which you can read in Art Deco San Francisco. It is up the road from The Family Farm, an exclusive San Francisco men’s club, which is part of the story.

But this church was also hit by an earthquake. After the 1989 Loma Prieta earthquake, it was shuttered. It has since had a retrofit and reopened. Our Lady of the Wayside is also on the National Register of Historic Places. Pflueger was 20 years old when it was finished.

Picked some lilacs! I hope they brighten your day! The fragrance is heavenly. #freshflowers #mccoypottery #spring #lilacs #butterflyvase
It's finished!! We painted the strips with four or five coats of black, then varnish.or poly another 5 coats.They are nice and glossy like lacquer. Can store so many different size books now, especially odd sized architecture books, which was Paul Frankl's original impetus to make his. It worked out for this space and made room for the window and get the most shelves out of the wall space. Thanks to my talented husband @16inchesoc for hand crafting my dream bookcase. #skyscraperbookcase #skyscraperfurniture #1920s style #artdeco #artdecostyle