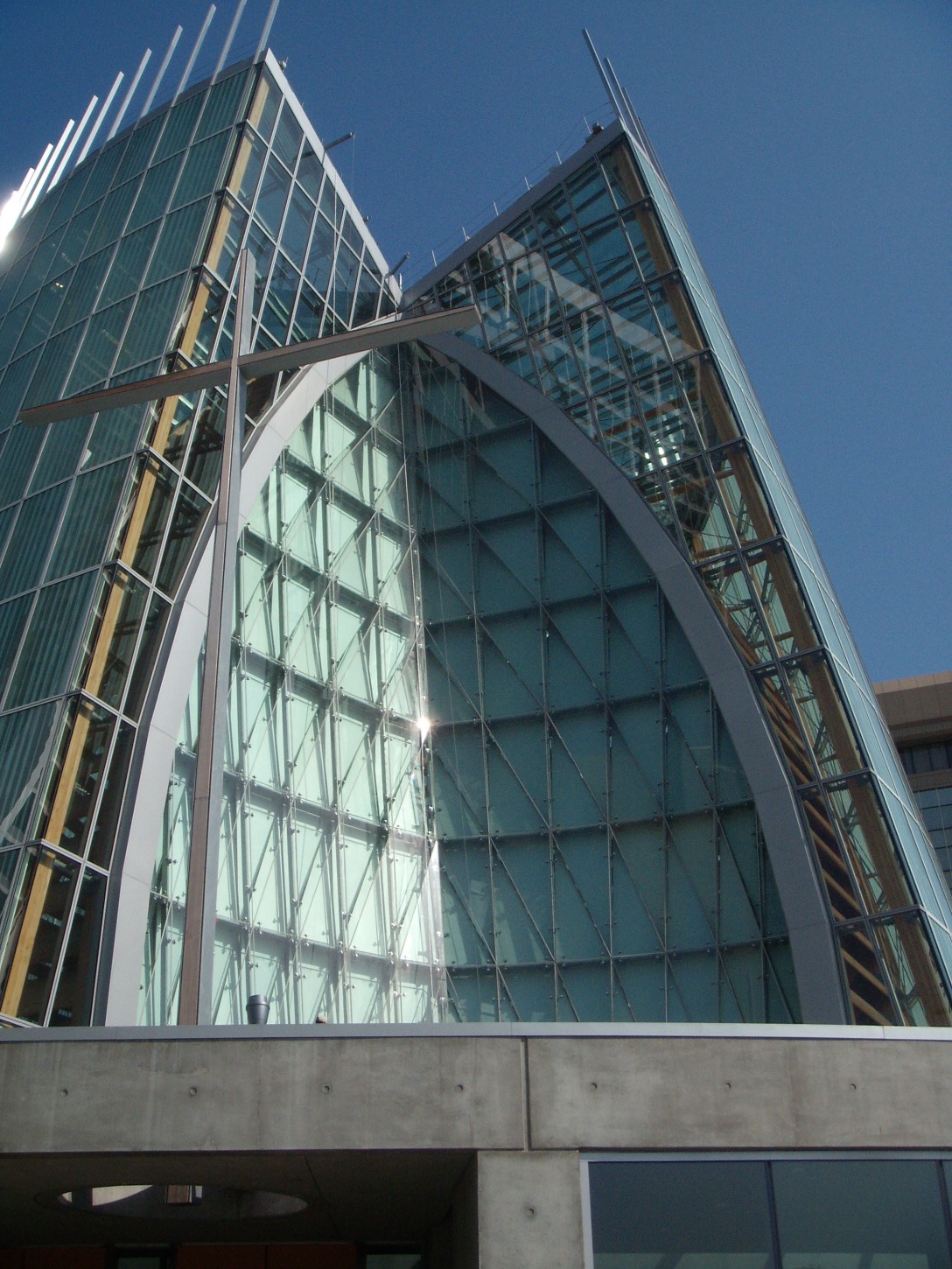 The monumental Cathedral of Christ the Light has graced the shore of Lake Merritt in Oakland since September, 2008 but I only recently had a chance to visit. After hearing the name of the architect – Craig Hartman – two or three times in casual conversation in the last few months, it seemed like a good time to look at the work of a living architect for a change.

Hartman, design partner at the San Francisco office of Skidmore, Owings & Merrill LLP, has used glass, steel and other materials typically associated with the skyscrapers his firm is known for, to create a luminous and grand cathedral. The aptly named Cathedral of Christ the Light sits like a shimmering cone and is the focal point of a large plaza with other diocese buildings and a green space. It is another architectural must-see in the East Bay, along with Bernard Maybeck’s First Church of Christ, Scientist, Julia Morgan’s Berkeley City Club and Timothy Pflueger’s stunning Paramount Theatre a few blocks away.

The commission of a cathedral is an especially rare one for most architects. The last cathedral built in the Bay Area was St. Mary’s, formally known as the Cathedral of St. Mary of the Assumption on Gough Street, completed in 1971. Its washing machine-like agitator steeple is a distinct presence in the San Francisco skyline but the interior has always seemed dark and uninviting to me.

The Cathedral of Christ the Light was commissioned by the Diocese of Oakland after its neo-Gothic Cathedral of St. Francis de Sales was irreparably damaged in the 1989 Loma Prieta earthquake. The diocese held an architectural competition, and initially awarded the job to Spanish starchitect, Santiago Calatrava. But in 2003, Calatrava withdrew from the project, and the runner-up, the design by Hartman, was selected.

The influence of the light at Ronchamp

Hartman, who spoke with me for an article in the Wall Street Journal, said one inspiration was the way Le Corbusier used light in his famous chapel, Notre Dame du Haut in Ronchamp, France.  After studying abroad in London while attending Ball State University’s then-nascent College of Architecture, Hartman made his own pilgrimage to see the iconic chapel.  He hitchhiked to the village of Ronchamp to see Le Corbusier’s modest chapel of reinforced concrete, with its sloped roof and thick concrete walls, punctured with squares and rectangles to let in the natural light.

“I was stunned to see the way light was introduced to the space, and with very modest materials,” Hartman recalled.

Light and space play a big theme in all of Hartman’s work, from his office towers in San Francisco, the International Terminal at SFO, an urban plan for Treasure Island, and his much-lauded U.S. Embassy in Beijing. Light is a major component of his cathedral, as if it were another building material. The result melds the historical, traditional and contemporary, as architect and client sought to build a 21st century cathedral, with some vestiges of tradition.

Chartres and the Gothic love of geometry

The cathedral also evokes some images of the medieval Chartres Cathedral, an hour south of Paris, renowned for its long, tortured history, its mismatched spires and ornate stained glass windows, which were removed and spared from the bombings during World War II. Chartres crowns the top of a long winding hill above the small city of Chartres.  Oakland’s cathedral is at the crest of a slight elevation, where a long, straight ramp, called the Pilgrim’s Path, leads from the sidewalk on Harrison Street to the formal entrance at the south end.

Stepping inside the grand doors, a huge, round baptismal font of dark granite also acts as a vessel for holy water, echoing the lake across the street. The cathedral is aligned with Lake Merritt and the moving sun, the interior capturing every angle of light.

“It’s almost like a kaleidoscope,” said Rev. Paul Minnihan, the Cathedral’s provost, as he gave me a tour.

The presence of light can be stunning, depending on the time of day. The interior of the sanctuary is framed by 26 ribs of curved Douglas fir, 110 feet high, and 768 fixed slanted louvers, which flood the interior with light. The northern wall, called the Omega Window, has a digitized version of a sculptural relief of Christ in the Chartres cathedral. The image comes through a series of aluminum panels that have 94,000 punctured holes of varying sizes letting in different degrees of light.

The image of Christ looms 58-feet high like an apparition and appears darker or lighter, depending on the time of day. It can even been seen in the evening, as the cathedral, lit from inside, glows. The hologram-like image of Christ is both a 21st century interpretation of a medieval work of art and another homage to the Gothic cathedral.

However the floor plan of the sanctuary, which seats 1,350, is not the standard cruciform pattern. Hartman wanted a modern approach versus the traditional hierarchical form used by Gothic church builders, where the congregation faces the altar.  “The idea here is to have the altar in the center and have the congregation around that,” he said.

After Hartman was chosen for the cathedral, he consulted with Walter Netsch, one of his mentors from his early years working at SOM’s Chicago headquarters. Netsch had a big influence on Hartman’s career. As a young student in the late 1960s during a visit to the U.S. Air Force Academy, it was seeing one of Netsch’s most famous works, the radical Cadet Chapel  and its soaring row of triangular spires in Colorado Springs, Colo., that inspired Hartman to consider studying architecture.  “The amazing circle of life, I suppose,” he said.

The geometry of circles, spheres and squares plays a role in his design. The sanctuary design refers to the intersection of two overlapping spheres, known as vesica piscis, an ancient symbol for Catholics and other faiths, representing Christ, the congregation, procreation and the basic symbol of Christianity, the fish.

“I felt that the building, in addition to light, should have a very strong geometrical base,” Hartman said, noting that geometry was the basis of all the great Gothic cathedrals. Netsch also advised Hartman to read “The Church Incarnate” written by a German architect known for his churches, Rudolf Schwartz.  Bill Marquand, an architect in Lafayette, called Schwartz a “major theoretician” and said his writings were “very deep.”

Some visitors might miss another garden area behind the cathedral, which was designed by and dedicated to victims of sexual abuse by priests. While the garden is small, the New York Times noted in 2008 that it is “the largest and most prominent recognition of the scandal ever built at an American cathedral.”

The centerpiece of the simple garden is a sculpture by artist Masatoshi Izumi in basalt stone, broken in three pieces. The benches and surrounding hedges mirror the vesica piscis shape of the cathedral. A plaque at the site says, “We remember, and we affirm: Never again.”
You don’t have to be religious to appreciate Hartman’s Cathedral of Christ the Light. While there are many references to the theological, the mystical and the ethereal, it is also a celebration of the here and now, of life.

Twin possibly Victorian era cottages, by the sea on Eden Road in Rockport, Mass. They look out at two Thacher Island lighthouses #architecture #victorians #newengland #capeann #capeannma #essexcounty #twinhouses #igessexcountymass #edenroad #beachlife #coastalgrandmother
As many of you know the @clubdeluxe1 Club Deluxe on Haight Street has said it is closing because of a huge rent hike. It is possible that becoming a Legacy Business in San Francisco may help its situation, if the landlord will agree to a 10 year lease. Please vote in the @sfheritage legacy business contest, email Supervisor Preston about your concerns (prestonstaff@sfgov.org) and share any history you know about the club with SF Heritage and the Art Deco Society of California. The Club Deluxe is believed to have opened in 1989, owned then by musician Jay Johnson. But the space may have started off life as the Haight Grill in the late 1920s (research ongoing). More to come. For now please help the @artdecoca and SF Heritage raise attention to the club's plight. And go in person while you can to hear local musicians like @a.modernist Nick Rossi and many others. Check out the great streamlined moderne interior with glass blocks, chrome trim, golden wood paneling, and murals that are evocative of the 30s. (Anyone know any info on the murals?). Please vote at sfheritage.org/haightlegacybiz/