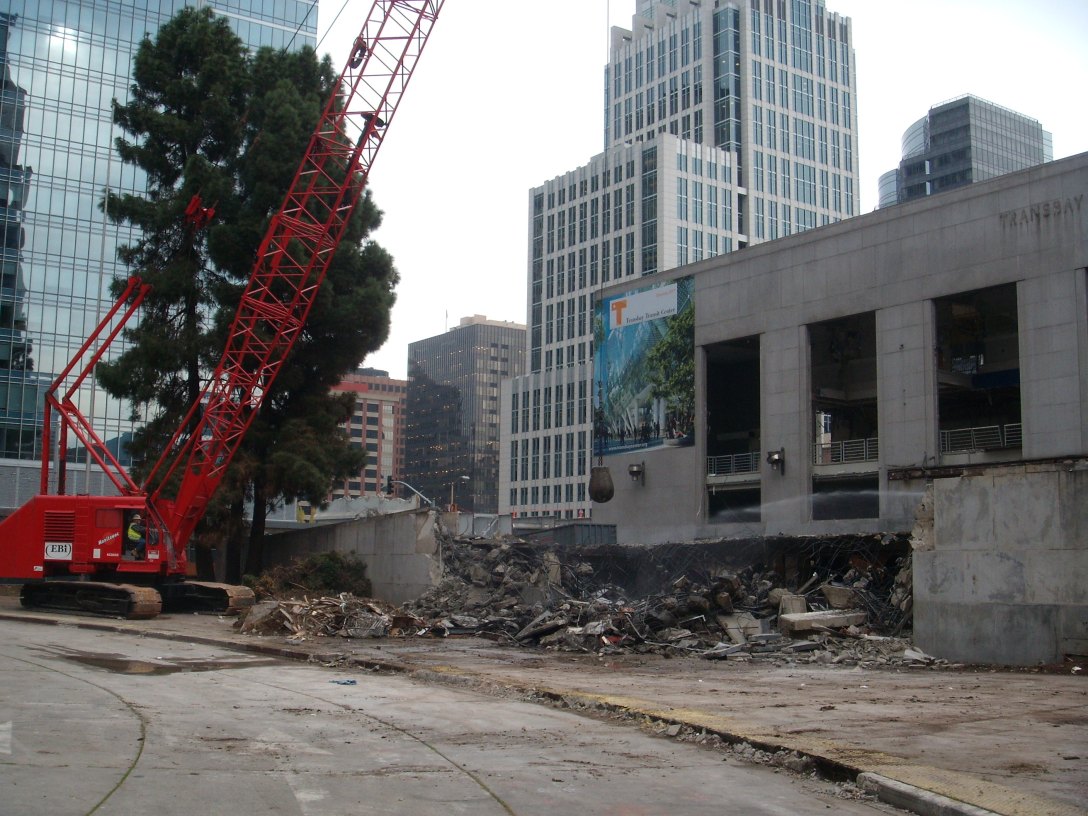 The demolition of the front of the Transbay Terminal began today, with the repetitive swinging of the wrecking ball, which the contractors call “Big Red.”

The Transbay Joint Powers Authority, in one of the oddest press releases I have ever seen, heralded the news,  saying that the wreckers Evans Brothers, Inc. “dropped the historic first wrecking ball on the front facade of the old Transbay Terminal building, marking the project’s progress.”

For those of us in the minority who like the building, which was designed by Timothy Pflueger, Arthur Brown Jr. and John Donovan, and completed in 1939, it was not a pretty sight. I tried to be stoic, thinking about Richard Nickel, the architectural photographer and preservationist who witnessed more demolitions of Louis Sullivan buildings than salvations. In addition to his photographs of the buildings, he also salvaged ornament from their wreckage, until he died inside the Chicago Stock Exchange, when a wall collapsed on him, in part because the buliding was so weakened by the water sprayed during the demolition.

It was fascinating and disturbing at the same time to see the guts of the building spewing forth and many spectators had the same ghoulish fascination with watching something being wrecked. But it was still hard to see, especially knowing that the building was one of the more modern works of two of the city’s well-known architects of their eras, Pflueger and Brown. Fortunately, much of their work is extant in San Francisco, but this also made the demolition of the Bauhaus-inspired building harder to watch.

The act of tearing down a building brings a lot of pollution into the air and it was shocking that none of the wreckers seemed to be wearing masks. They have, as all demolition sites do, someone spraying water after the wrecking ball makes contact with its target, to control the dust and building particles flying through the air.  The one interesting thing is that it’s not gone in one full swoop of the ball: it’s a long, tedious, rather monotonous swinging of the ball, until it breaks the concrete or granite.

The windows have been torn out, and hopefully some of them have been preserved somewhere, along with the wooden benches inside and some other fixtures. (Please see older post with some photos). The 1930s lettering is gone and hopefully preserved. A wrecker told me that the facade won’t get hit with the wrecking ball until next week sometime.

I was not the only one who was sad to see the building go. I talked to a few people gathered around, some taking photographs. Many others were also sad, and talked about family memories associated with the terminal. One 62-year-old photographer even remembered taking the train, the Key System, across the Bay Bridge. Some, though, did talk about its usefulness as a modern train station and its current unkempt state. But it seems to me that no one really gave the building a chance to play a role in the new design.

And it's a wrap. Sunday night was the last night of the Noir City film festival, where we saw 24 films, all from 1948, in ten days. We managed to attend every night, despite the Tesla/Elon trial in Federal Court and tech earnings all week. Thanks to Dennis Hearne @mrluckysf for the express bus tips, and for taking great photos of everyone!! Was so good to see many people I have not seen in awhile and fun to hang out with Noir loving pals like Heather, Rose, Sheryl, Leah, Kimberly, Isabella, Alice, Laurie, Rory, Jonathan, Kathy, Suzanne and many others! Thanks to @eddie_muller8591 for mentioning @16inchesoc and me in the program as one of the couples who met at the festival!! I think among my top fav movies were "All My Sons," "Larceny," and "The Naked City" but it's hard to pick. The Preston Sturges satire "Unfaithfully Yours" was so fun. Thanks again to everyone at the @filmnoirfoundation and the Grand Lake Theatre for an amazing 10 days. #filmnoir #noircity20 #grandlaketheatre #oakland #1940s #oldmovies #vintageclothing #black&whitephotography
Did not post too much this year so this is a top nine from our Christmas road trip down south. Had a great holiday with @spotlightfloodlight @araceli_cortes9 and @16inchesoc. We returned via train on the Coastal Starlight just in time to avoid the atmospheric river (and our train hit and killed someone walking on the tracks, so awful). Sadly I did not get any photos of the train before we left in daylight because it was kind of dark with the impending storm, and my few photos at Union Station were in bad light. Was fun to see the amazing yet terrifying coastal highway again. I drove for a small section, yikes. So scary. In order some highlights: