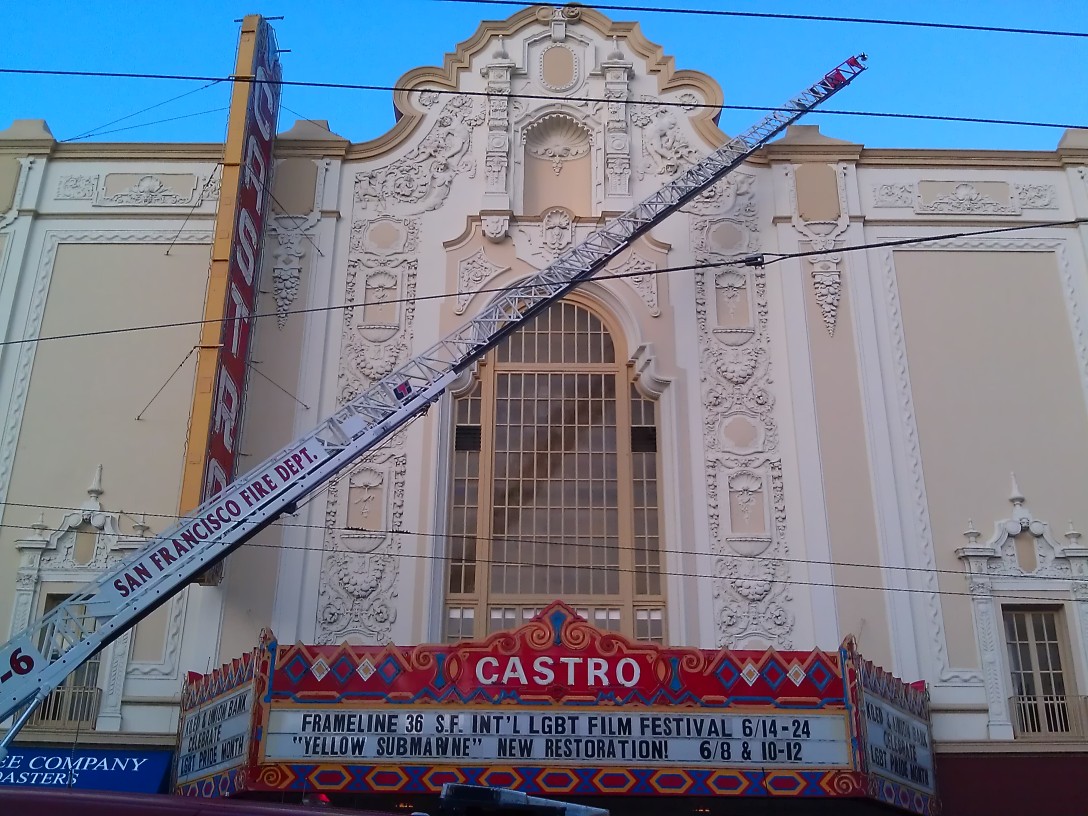 It’s not a sight you want to see. As I came out of the Muni underground at Castro Street earlier this week, police cars were blocking traffic at the corner of Market and Castro, and three fire trucks and their crews were busy in front of Timothy Pflueger’s famous Castro Theatre. Two long ladders were stretched all the way up to the roof of the 1922 building.

A big crowd of concerned neighbors stood anxiously watching the drama from across the street, even though smoke was no longer visible. Rafael Noz, who lives in the Castro, called the theatre “the cathedral of the neighborhood” and he was thankful that the San Francisco Department had the fire under control.

A fire department spokeswoman later said that Monday’s fire was a single alarm fire and the SFFD arrived at 7:38 pm, after getting a call from someone in the neighborhood. The theatre, as of late, has been closed on Monday nights. The fire was limited to a small area behind the theatre, and was put out in 20 minutes. “There was trash involved in this fire,” said Mindy Talmadge, public information officer for SFFD. “However, the actual cause of the fire is under investigation.” She added that because the theatre was closed when the fire started, “investigators are looking at this more closely.”

Neighbors in the Castro and worldwide fans of the theatre, which is still owned by the Nassers, the original family who commissioned it, are thankful to the SFFD, and to the vigilant neighbor who called in the emergency, helping avert a major tragedy.

3 thoughts on “Castro Theatre saved from fire by SFFD”

Celebrate the inaugural World Art Deco day with @artdecoca and other groups around the world! Please share photos of your favorite local Art Deco buildings, objects or art works. This is the former I. Magnin department store in Oakland, in the area now called Uptown. Now an office building, it is still faced with its stunning original terracotta and fortunately it still has its amazing font with the old name of the store. #artdeco #architecture #worldartdecoday #weeksandday #1930s #terracotta #departmentstores #uptownoakland #icads
Celebrating the inaugural #worldartdecoday with Art Deco in the Golden State of California. Paramount Theatre, Oakland; Alameda Theatre, Alameda; tiles at Catalina Casino, Santa Catalina Island; murals at San Francisco Art Institute; Shell Building, San Francisco These works are all also @artdecoca past and current preservation award winners!#artdeco #California #architecture #1920s #1930s #icads #worldartdeco